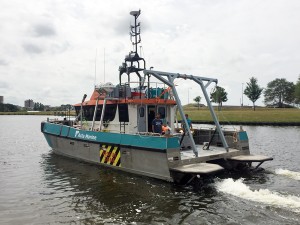 “In preparation for offshore wind and power cable projects in Western Europe, operators want to have their proposed cable routes surveyed for potential unexploded ordinance,” states Acta Marine Commercial Manager Bert de Ruiter. “And because we have built up considerable experience carrying out this type of work for end-clients in the offshore renewables industry, we are often the preferred party for the various survey companies who are involved in these projects.”

(pUXO) surveys are performed by towing gradiometer equipment (which are similar to metal detectors) over the seabed. The equipment is towed at a distance behind the vessel so that it is unaffected by electromagnetic effects of the vessel itself. The survey vessel also needs to be equipped with a Multi Beam Echosounder (MBE), and sonar and acoustics transducers to investigate the surface of the seabed and the positioning of the gradiometer wings. 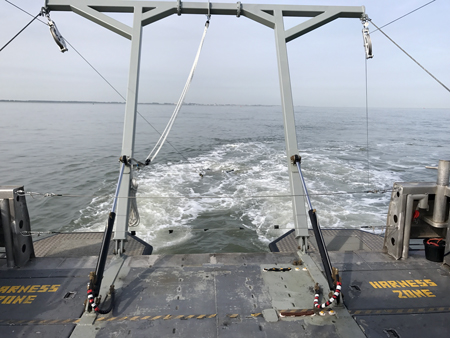 Matching the shallow draft requirements of both projects, Acta Marine has deployed Offshore Phantom from its own fleet. With a draft of just 90cm, the 15.5 metre long vessel was fitted with survey brackets and a stern-mounted hydraulic A-frame before mobilisation.

“We have taken on similar projects previously – using the Phantom’s sister vessel Offshore Performer,” Bert goes on to say. “So our technical department knew exactly what modifications are needed. What they have done is quite unique in that, although the survey arms are deployed over the sides of the vessel, they can be completely retracted when not in use or if the transducers require servicing.”

Due to a high vessel occupation rate, it was not possible to supply the second vessel from its own fleet. “It was for this reason that we have, once again, teamed up with Schiedam-based company Marine Projects Rotterdam, who provided their vessel MPR Sounder.”