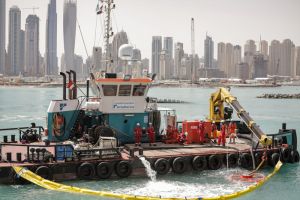 Representatives from companies operating in the oil & gas and marine construction industries were invited to see Acta Marine’s Multicat Coastal Guardian assisting the Foru Solution team with the demonstration.

Foru Solution produces patented oil spill recovery skimmers that have been shown to be significantly more efficient than conventional skimmers. The company offers two different skimmers depending on the location of an oil spill situation. The FORU-70 is intended for use in more sheltered environments such as rivers, lakes and harbours. Crucially, it can be deployed in waters as shallow as 75cm and is light enough to be carried by two people. With a higher recovery rate of up to 340 m3/h, the FORU-340 has been designed for use in harsher offshore environments, but can still be utilised in harbour and coastal areas too.

“By bringing together an innovative and young company like Foru Solution with an experienced and reliable service provider like Acta Marine, we have created a unique and prosperous business relationship,” comments Pieter Liezenga from Acta Marine. “Operating in shallow waters in one of our core disciplines. Therefore the versatility of our Multicat workboats combined with the Foru skimming equipment means that oil spill recovery activities can be mobilised quickly and performed effectively.”

After the demonstration, both companies received positive and interesting feedback from the attending guests. “The presence of Foru skimmers will confirm a company’s readiness to respond to any type of oil spill,” adds Bert Smit Sibinga from Foru Solution. “We are looking forward to working closely with Acta Marine to develop this unique concept and enhance the environmental safety of the maritime environment.”