After finalising a long term charter in the oilfields of Abu Dhabi, Acta Marine’s DMS Globe was contracted to assist a construction project in Qatar. This involved the construction of a private artificial island development. DMS Globe’s effectiveness in shallow water conditions played an important role in the project, ensuring its smooth and efficient completion. 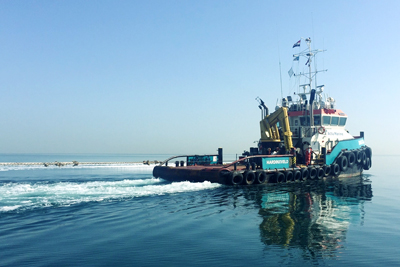 DMS Globe was mobilised as the main tug during the project. As well as transporting various goods, her responsibilities included towing barges loaded with rocks and aggregates; operations made straightforward with a bollard pull of almost 30 tonnes.

A Shoalbuster 2609, the DMS Globe has the right shallow draft capabilities and all the right deck equipment required to perform such a project. These vessel specs combined with the hard work and experience of her crew were very much appreciated by a satisfied customer.

Our thanks go to the charterers and the project’s stakeholders whose professional cooperation proved invaluable in the successful completion of the project.

Keeping in line with the rest of the Acta Marine fleet, the DMS Globe sailed to Abu Dhabi shortly after completing the Qatari project to be renamed Coastal Rambler.