Early delivery of the Acta Auriga from Ulstein Verft 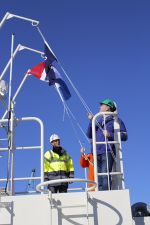 Acta Marine has recently been awarded a contract to assist Tideway B.V. (DEME Group) with its cable pull in, and testing and termination campaign on the German Offshore Wind Farm Merkur.

Acta Marine, which has an offshore walk to work vessel under construction at Ulstein Verft, has now ordered another one. This SX195 design is a DP2 Walk to Work Construction Support Vessel (CSV) for the offshore industry.

Acta Auriga, under construction at Ulstein Verft, was recently contracted to work at the offshore wind farm BARD Offshore 1: “Ocean Breeze Energy decided on this vessel due to a favourable combination of capability, capacity, design and fuel consumption. The delivery precision from Ulstein was also important.”

Multicats in the offshore wind industry

While Acta Marine’s Multicats are known for their multifunctionality across numerous maritime sectors, this post focuses on how these highly adaptable vessels have served the offshore wind industry over the previous months.